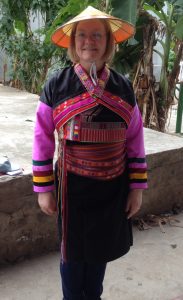 Not the most comfortable outfit, but definitely eye-catching.

In 2014 I was privileged to be invited to teach weaving to the ladies of the Dai Community in Pingzhou Village, Yunnan Province, China; the ladies were already accomplished weavers and embroiderers but I was tasked with teaching them some new techniques.

When I arrived in the village, it was to see the ladies were carrying the looms from their houses to a communal space in the centre of the village, where they would remain for over a week completely un-damaged or interfered with.  The looms were very simple machines, with two shafts for plain weave, and the first job was to increase this number to four and add an extra couple of treadles too.  The village joiner was called upon to complete this job and he quickly worked on all ten looms.

I had been concerned that, with no common language, communication would be a major difficulty; my travelling companion, Joseph, speaks Mandarin but these ladies had their own specific language.  There was one young woman who could speak both the local dialect and Mandarin so translation was a three-way affair, quite time consuming, but necessary.  It quickly became clear that this process would not always work, especially as our interpreter was not always available; the ladies and I soon settled on a very rudimentary way of communicating, thumbs up and thumbs down, which seemed to satisfy us all.  Had they been novice weavers this method of ‘talking’ wouldn’t have worked but they basically knew what they were doing and, once I demonstrated each technique, they were quick to catch on.

One of the main techniques I was to teach was a simple double cloth which the ladies had never experienced; they quickly understood the instructions for making the warp which I found a fascinating process.  As a weaver, I am used to doing all the necessary processes myself; measuring and winding on the warp, threading the heddles, sleying the reed and tying on but it was quite amazing how many of the ladies were involved with all of these individual tasks.  They all seemed to know exactly what was required of them and they worked as a complete unit while talking constantly. 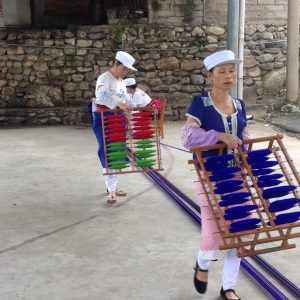 These lovely wooden frames hold the numerous bobbins required for the warp.

The warps were made on a huge scale, far longer than I would ever attempt, and were measured down the length of the available space and back again.  The yarn had been wound onto bobbins which were fitted into frames; these were then carried along the length of the warp where, at one end, the cross was created.  I had never seen this method before so I was fascinated with the technique; it was lovely to be learning something new myself.

Once the warps were made, the reeds were threaded, again in a way I had never seen but it was such an effective method.  Then the winding of the warp onto the beam began; one lady had the warp beam attached to her body with a strap and used her weight to tension the yarns as she walked forward.  Many of the other ladies were also involved in the process; combing out the warp so it wouldn’t snag, moving the reed and the cross as the warp was wound and laying in bamboo sticks as the warp wrapped around the beam.  When I wind my warps onto my loom the beam remains on the loom and all the work is done in situ; this method was so effective but it did require a lot of space and people.  A real communal effort.

The next task was threading the heddles, another new way of working for me; as with many weavers I am most familiar with my heddles sliding along the shafts and having ready-made eyelets through which to thread my warp ends but in this instance, the heddles were fixed in position which caused a few minor problems with the sett of the cloth and the eyelets had to be created when each thread was threaded.  The ladies had a nifty technique of inserting their fingers and twisting the heddle string to create an eyelet; it was fascinating to watch and as they were so well practised, they were incredibly quick.

Once the looms were completely threaded I then had to demonstrate how to achieve the two-layered fabric of double cloth; initially there seemed to be quite a bit of puzzlement and bemusement from the ladies, with lots of muttering, but once I had woven a small section of cloth and was able to separate the layers, all became clear.  Lots of thumbs up!

Another of the other techniques I taught was seersucker; this needed even further adaptations to the looms, to include a second warp beam, which was not as straightforward as we had hoped, but our joiner didn’t disappoint.  Again, it was a new technique for the Dai ladies but once those crinkled stripes started to appear, the smiles said it all. 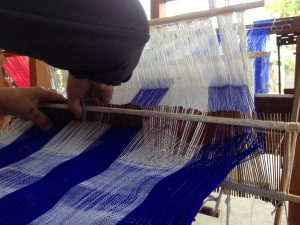 This fan-shaped reed might be a bit rough-and-ready but it produces a lovely curvy pattern.

One of the other techniques I was keen to try was weaving with a fan-shaped reed, a technique I had only recently tried myself on a trip to Sweden.  The reed I had used in Sweden was beautifully engineered in steel and wood but we had to make our own from bamboo and string; when I say ‘we’ had to make it, Joseph found a carpenter who was willing to make one for us.  The carpenter was not familiar with weaving and didn’t even know what a reed was so for him to create a useful tool, from the most rudimentary of sketches, was almost miraculous.  Despite the reed being a bit rough and ready, it worked beautifully and gave a wonderfully curvy fabric.

The biggest disappointment, from my point of view, was that I had to leave the village before  the ladies had finished weaving all their fabrics; it would have been wonderful to photograph the cutting-off of all those metres of vibrant cloth. 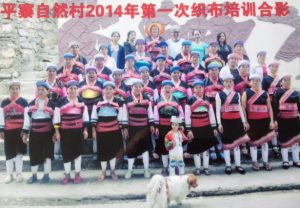 My time in Pingzhou will never be forgotten and I think I learned as much from the Dai ladies as they learned from me.  They were lovely, generous ladies, many of them presenting me with gifts on my departure and maybe one day I will meet them again.

You can see more pictures from my visit here.