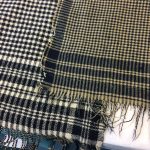 The old plaids in the Heriot Watt archive 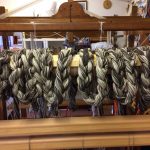 The six individual warp sections for the Shepherd’s Plaid. 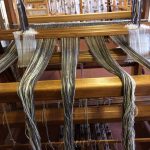 Warp sections ready to be wound onto the warp beam. 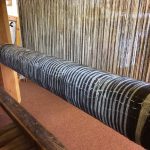 Winding on the Shepherd’s Plaid warp. 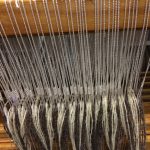 A small section of warp showing the threads in the heddles. 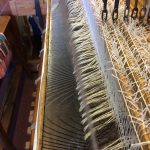 The warp threads have been sleyed through the reed. 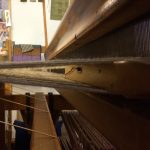 The shed and the shuttle. 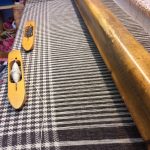 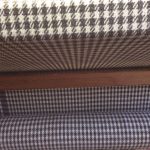 A peak beneath the loom. 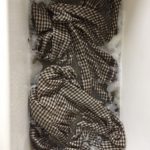 The fulling process is laborious but well worth the effort. 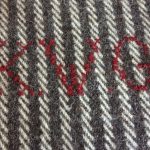 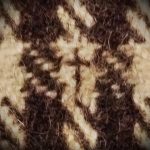 A subtle cross hidden amongst the checks. 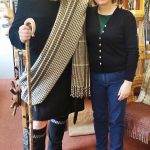 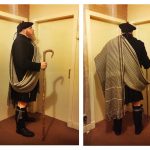 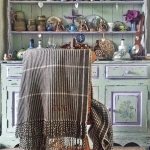 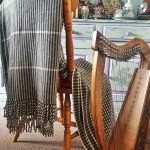 Late last year I was contacted by a potential customer with an enquiry about a commission which would prove to be the most absorbing and interesting for a long time. The commission was to weave a Shepherd’s Plaid, a garment specific to Northern England and Southern Scotland. My client, Keith, had very clear ideas of what he wanted in his plaid and it was so enjoyable to work with an interested and knowledgeable person. The italicised words are his.

I teach on the beauty and ingenuity of ancient Scottish clothing which mainly centres around the great plaid (feileadh mòr), the small kilt (fèileadh beag) and their accessories either daily or in times of war. It was only upon seeing the painting ‘Crossing The Moor’ by Richard Andsell (1863) that I discovered a piece of Scottish outerwear that I had not seen before and after some online detective work I discovered it was called a ‘Shepherd’s Maud’ (‘maud’ being Scots Gaelic for blanket). I discovered that the tartan was also known as the ‘Border Tartan’, ‘Border Drab’, ‘Northumberland Tartan’, ‘Falkirk Tartan’, ‘Shepherd’s Check’, ‘Shepherd’s Plaid’ and ‘Galashiels Grey’, amongst others. The tartan itself is one of the oldest on records and dates back to Biblical times.  So, being so moved by the painting and feeling the image was very representative of myself I made the decision to find one for myself! – easier said than done.

I had previously woven a plaid two years ago and, as it is such an unusual item, I had never expected to weave another, especially so soon. During my research for the original plaid, I had learnt quite a bit about the fabric but I wanted to take my research further for this commission so I made an appointment with the archivist at Heriot Watt University in Galashiels to see some of the plaids in their collection.

The two plaids I was shown were very different in both scale of pattern and condition. The first was woven in natural black and white in a design very similar to the one I had originally woven; it’s condition was absolutely remarkable for a piece of cloth that was around two hundred years old.

The second plaid was a finer fabric, almost like a dress fabric, and woven in dyed navy blue and fawn; the checks were much smaller in scale than the first. It had been woven in two widths and sewn together to form a wider cloth; the end had been stitched to form a triangular hood. I had never seen this on a plaid before but it seemed a sensible addition to the garment. The condition of the plaid can best be described as well worn; it was patched, stitched and darned in numerous areas, obviously a well-worn, well-loved item.

It was fascinating to see the two plaids but it was from the first that I took most of my ideas; Keith wanted a heavy cloth in natural colours and had good ideas for the stripes along the selvedges and along both ends of the plaid.

After a lot of hunting online I finally found a shepherd’s maud that I could buy, not a second hand one (as they’re rarer than seeing a white whale!), but a new one. The company that was selling it were based in America, had only one in stock and although it had originally been woven in Selkirk in Scotland I had to buy it from them and have it imported back to Scotland (a costly endeavour). Upon receiving it I loved it and enjoyed having it around me out in the fields and being able to incorporate it into my teachings, but I was always just a little disappointed in its appearance. The checks were black and white, but the black was dyed black and the white was bleached white so it was never what I had imagined in it’s colouring and also in its thickness as it hadn’t been waulked and fulled after been woven, saying that though I had a maud and it was a blessing to me and to the others whom I introduced it to.

It was only a few days later that after teaching at a conference in Manchester that God, (I’m a Christian) asked me to give the maud to a lady who needed some comfort after the passing of her husband.  Unbegrudgingly, I gave the lady my maud as a gift and I have learned since that it has been such a blessing to her in many ways.

So it was in November 2016 I found myself maudless and most definitely feeling a little “naked” when out my walks and also when teaching! It was then I stumbled I stumbled upon a photo on the internet of Mr Peter Arnold from the Northumbrian Language Society sporting a maud, but this wasn’t an old vintage photo, it was a recent photo! and his maud was glorious!! After some more online homework I discovered that Peter’s maud was woven by Flight Weaving in the Borders and not only that but it was woven by hand – it hadn’t come off a factory machine!! This maud was using untreated wools and it had been waulked and fulled – this was the real deal!

The setting up of the loom was time consuming and having to do a wide, heavy warp single-handed required concentration.  The plaid was woven to 120cms wide and was required to be over 5 metres in length so there were six, 20cm wide warp sections, all of which had to be carefully controlled and tensioned as they were wound onto the warp beam.  This is not a particularly difficult task but it is one that deserves time to get right; a well-wound, well-tensioned warp will prevent problems later in the process.  The measuring of the warp and dressing of the loom took approximately two days but once I began to weave I had to ration myself to half-hour sessions because the cloth needed such a heavy beat to achieve the density, I quickly began to feel the tension build in my shoulders and back.

Despite having to take regular breaks the plaid grew fairly quickly; once it was off the loom another physical process was needed to finish the cloth. Fulling is a process which allows the fibres in the wool cloth to begin to felt together to make a strong, more durable fabric. Historically, this would have been done by a number of women ‘waulking’ the cloth in a communal effort, often singing while they worked. The method I use is slightly different but no less effective; trampling on the cloth in a bath of hot soapy water over quite a long time shrinks the fabric in a controlled way. Care has to be take to trample over all areas of the fabric to make sure shrinkage is equal but as I had previously done a sample to work out the shrinkage percentage, I knew what I was aiming for. My sample had shrunk by 20% which was why the cloth was woven to over 5 metres; once the fulling was finished the plaid measured 105cms x 420cms.

Keith also had a few extra little requests; his initials embroidered in cross-stitch close to one corner, a small crucifix hiding amongst the checks and a small embroidery to identify myself as the weaver. It was quite common for the owner of a plaid to have their initials embroidered onto the cloth and this little extra touch to Keith’s made it all the more authentic.

After 4 months of consultation with Janis and her creating the subject of this writing I am now the very proud owner of a beautiful bespoke and unique shepherd’s maud which is as close to the original garment as you’re ever likely to get – in its colour, in its thickness, in its length and in its design. It has been hand created by a border weaver exactly as it was done back in the day and rightly so.

Remember “man made” is rarely as good as hand made.

I was a little apprehensive when Keith came to collect his plaid, it was such a personal piece for him and I would have been so disappointed if he had disliked any aspect of it. Fortunately, he was thrilled with the result and it looked absolutely fabulous, I’m sure it will get many years of use.